by Tom Rogerson with Brian Eno 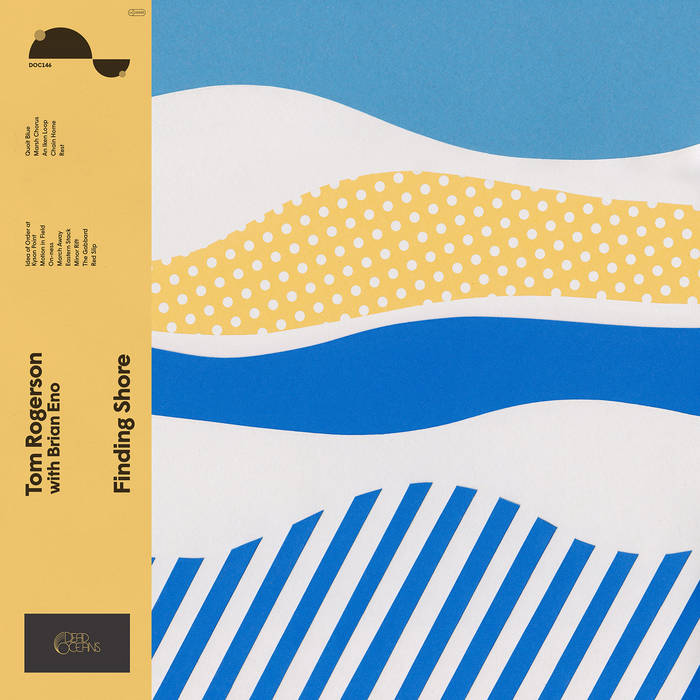 Like every child, Tom Rogerson loved to make a noise. Life as an improviser began at a tender age when he would copy his older sister after she'd done her piano practice. "I was three or four, my legs couldn't touch the ground," he remembers. "I enjoyed smashing the keys but I then rationalised it into what I do now."

Rogerson's new solo album 'Finding Shore' isn't a discordant, jarring piece however, but 13 elegant and evocative tracks assembled in collaboration with Brian Eno, who he met outside the toilets after a gig. At first the pair didn't speak about music at all, but bonded over their roots in the Suffolk town of Woodbridge, located on the strange flat landscape of Eastern England, all heathland, military testing sites, estuary mud and the site of the ancient Sutton Hoo ship burial.

'Finding Shore' is the sound of Rogerson distilling the essence of what he does after a protracted musical journey from childhood up until now. He took the traditional route of music lessons and learning notation before starting composing "properly". As a 17-year-old he had the odd contrast of being taught by the composer Harrison Birtwistle but also working a job playing lounge piano in a dilapidated hotel in Peterborough: "It was classic faded grandeur, hilarious, Fawlty Towers, English culture at its best," Rogerson says. Within that oddly formative experience, his practice as an improvisor developed: "I'd come in and mess around, it was my way of not thinking," as he puts it. Rogerson never felt comfortable in what might have been the accepted route of becoming a classical composer. He spent some time in New York playing jazz, recording with Reid Anderson of The Bad Plus, and had a successful career with post rock group Three Trapped Tigers, yet however enjoyable that experience was, he admits it was "definitely a diversionary tactic". Everything seemed to be an escape from the classical world or, as Rogerson himself puts it, "falling out of my ivory tower very slowly".

Instead, improvisation has always had a visceral psychological role for the pianist. As he says with great honesty, "The piano is fairly integrated into my emotional communication". Eno's influence on 'Finding Shore' was to enable Rogerson to overcome his fear of committing to any one piece and turning it into an album, an issue he says he shares with many improvisers. Eno suggested that they try experimenting with the Piano Bar, an obscure piece of musical equipment. This works by using infrared beams focussed on each piano key. These are then broken as the keys are played, transforming the piano's note into a midi signal that can then be used to trigger or generate new, digital sound. "It immediately puts a frame around what I do, which is what all improvisers need," Rogerson says.

The first day in the studio was instructional in terms of what was to come. Eno had already mic'd up a piano and asked Rogerson to do what he'd normally do at a gig. Rogerson describes what he played as "very emotional, very cathartic, me wailing and screaming, getting quite out there. I thought 'wow that was just such a perfect 45 minute thing we could just release that'." But Eno had other ideas, eventually zooming in on just 30 seconds of music, cutting it up and looping it to a form inspired by Eric Satie. The result is the three-minute-long 'An Iken Loop', which is now Rogerson's favourite on the record. The fragment that made the new piece could not, of course, have happened without the preceding improvisation. "It was this classic Eno, almost scientific thing," Rogerson says now. "He always finds a system that can be a source of creativity". Other Eno-devised systems included playing along to an arpeggiator, cut-ups of chord sequences written down and pulled out of a hat, or placing Midi and physical sounds in juxtaposition. "It was never anything other than pleasurable," says Rogerson of the experience. "We had plenty of experiments that didn't work, but it never feels like you're failing. He's quite egoless as well about his own ideas.".

As an improvisor, Rogerson is keen to suggest that "my music is never about anything" and that "nothing inspired this record"... but agrees that as improvisation taps so directly into the subconscious, everything did. So that chance meeting with Eno and subsequent conversation about the Suffolk landscape did find its way into 'Finding Shore'. "I do totally hear it, I'll listen and think 'oh that sounds like the bells at Woodbridge, that's the birds, the wind rustling in the reeds'. I think it permeates my music, and Brian's ambient records. That 'is it organic or is it electronic thing' is so interesting". Most of all this exploration of the familiar territories of home and shared connection with Eno that has made for a return to where he began as a child, bashing away on the family piano: "I remember smashing out C Major chords again and again and really loving it. It's the same as what I do now, funnily enough, I've come back to it - it's taken me years!"

Like every child, Tom Rogerson loved to make a noise. Life as an improviser began at a tender age when he would copy his older sister after she'd done her piano practice. "I was three or four, my legs couldn't touch the ground," he remembers. "I enjoyed smashing the keys but I then rationalised it into what I do now." ... more

Bandcamp Daily  your guide to the world of Bandcamp